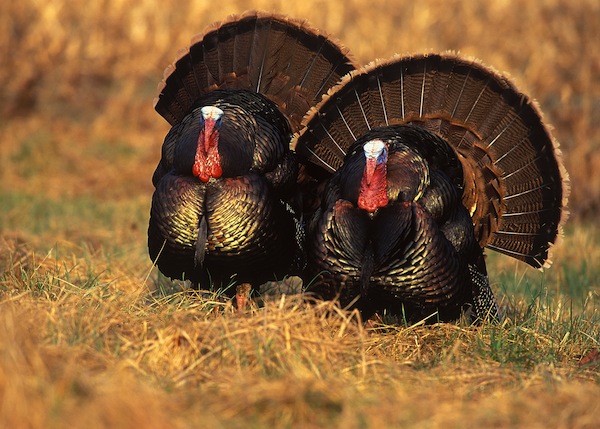 Vermont is no different than any other New England state when it comes to Thanksgiving: turkey is on the menu; dinner is in the formal dining room. To honor this terrific holiday we thought we’d take a look at the great bird itself and the lovely room in which it is consumed.

The Eastern Wild Turkey, the one we see so often in Vermont, is the most abundant of all species of wild turkey. In the 1800s, extensive forest clearing and the spread of agriculture pushed Vermont’s wild turkeys to extinction. They were first reintroduced in 1969 and fortunately have made a prodigious come back. They are now widespread in our state’s deciduous forests.

According to Vermont Fish and Wildlife Department, the best turkey habitat in Vermont is in the Champlain Valley and in the southeastern and southwestern parts of the state. A turkey needs several types of habitat within its range:

According to American history, Benjamin Franklin preferred the turkey over the eagle as our nation’s emblem. In a 1784 letter to his daughter he wrote:

For my own part I wish the Bald Eagle had not been chosen the Representative of our Country. He is a Bird of bad moral character. He does not get his Living honestly. You may have seen him perched on some dead Tree near the River, where, too lazy to fish for himself, he watches the Labour of the Fishing Hawk; and when that diligent Bird has at length taken a Fish, and is bearing it to his Nest for the Support of his Mate and young Ones, the Bald Eagle pursues him and takes it from him.

With all this Injustice, he is never in good Case but like those among Men who live by Sharping & Robbing he is generally poor and often very lousy. Besides he is a rank Coward: The little King Bird not bigger than a Sparrow attacks him boldly and drives him out of the District. He is therefore by no means a proper Emblem for the brave and honest Cincinnati of America who have driven all the King birds from our Country…(source: wikipedia.org)

According to the Vermont MLS, Addison County has some wonderful homes with formal dining rooms. Among Vermont real estate currently on the market, my favorite dining room is this one in this home on Mountain Road in Addison, Vermont. The kitchen here is spectacular, sunny and spacious. The kitchen island is perfect for cooking and entertaining (all the action at a celebration takes place in the kitchen anyway). I’d love to cook a Thanksgiving meal here with friends and family. Click either image below for full listing details.

Have a great Thanksgiving.