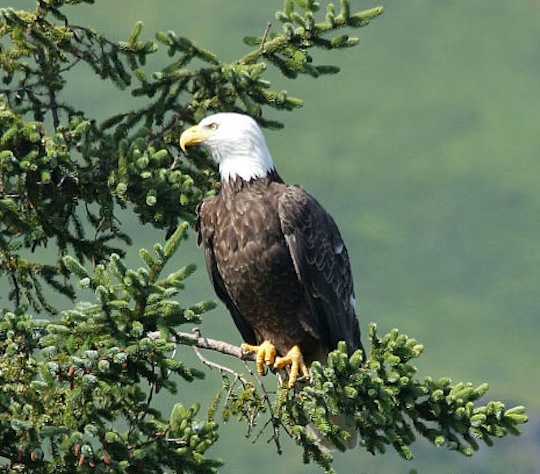 The 2013 nesting season in Vermont was good for bald eagles according to Vermont Fish & Wildlife Department and Audubon Vermont. Vermont Digger reports: “From 16 known nests, Vermont’s bald eagles produced 26 fledglings, or offspring that survived to leave the nest. This is an increase from 2012, when 24 fledglings were produced.”

The success story of our national bird inspired me to look at the fate of other raptors (predatory birds) here in Vermont. In the 1940’s, 50’s and 60’s many raptors in Vermont and all over the Northeast neared extinction due to habit loss and DDT poisoning (banned in the U.S since 1972). I chose to look into three favorites: the Osprey, the Peregrine Falcon, and the American Kestrel.

It is fairly well-known that osprey and eagles do not keep house together (if you see osprey, it is not likely you’ll see any eagles; if you find eagles, you wont find osprey). Bald eagles often chase away other raptors, especially their nemesis, the osprey. Does the eagle’s success spell certain doom for the osprey? The answer is a resounding no. The osprey was taken off the endangered species list in 2005. Today, the osprey can be found throughout Vermont, along waterways and lakessearching for fish and basically being amazing.

Here are some waterfront properties where you’ll be able to witness osprey and eagle success first-hand.

The eastern peregrine falcon has also had a great come-back. It too was removed from Vermont’s endangered species list in 2005. According to the Vermont Center for EcoStudies, “Vermont’s breeding population of Peregrine Falcons continues to reach new milestones on its long road to recovery.” The falcon’s recovery is so successful that The Onion published the spoof: “Peregrine Falcon Acting Pretty Cocky Since Being Taken Off Endangered Species List.” Peregrines have even adapted to city living, nesting on bridges and skyscrapers.

While we have no skyscrapers here in Vermont, we do have much of the falcon’s more traditional haunts: mountain chains. Here are two Addison County properties for sale near Snake Mountain, a great area to view the peregrine in action.

Sadly, the American Kestrel’s story warrants no spoof. In fact, populations are declining. According to the Vermont Center for EcoStudies, the population recently declined by 26%. The kestrel flourishes in agricultural areas and semi-open spaces. Its decline is attributed  to forest succession and urban/suburban development and loss of cavities due to removal of hedgerows. We need more Vermont properties with hedges! Here are the few listed in the Vermont MLS. If you are a fan of the kestrel, these could be the place you start its reintroduction effort!

Contact me. It may very well be time you were reintroduced to Vermont!