Gourmet Kitchens and the Kitchen Triangle in Addison County 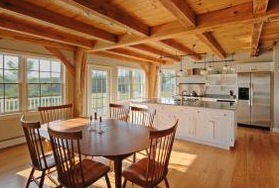 In many Vermont homes the kitchen is the center of the universe, especially during harvest season. This is the time of year when we bring it all indoors to that utilitarian kitchen triangle of creation. But even while the time-honored tradition of putting food by is having a Renaissance (right along with slow food, local food, organic food, and vegetable gardening), the kitchen triangle might be on its last legs.

The kitchen triangle has become such a ubiquitous part of modern kitchen design, that home-owners no longer even use the term in their MLS descriptions. The triangle theory started in the 1940’s at the University of Illinois School of Architecture “the cooktop, refrigerator, and sink are all placed at points on an imaginary triangle, the idea became the foundation of modern 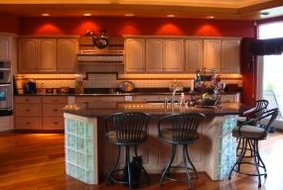 A social kitchen in Addison

American kitchen design”. (www.cultivate.com) During this time of post-war food rationing, the less time Americans spent in the kitchen, the better.

But the Triangle is changing, some interior designers even say it’s gone for good. As more generations are cooking together and more entertaining is happening in the kitchen, gourmet kitchen design is trending toward rectangles and even ovals. The social kitchen, for example, might feature multiple islands, while a kid-friendly kitchen would move the refrigerator to a place where kids can access snacks without interfering with the flow of dinner prep.

But regardless of the geometry, the kitchen is where creative things happen. Having the right space (the perfect kitchen shape is entirely subjective) and the right equipment (called gourmet kitchen in the Vermont MLS) can mean the difference between mere sustenance and full-on celebration. 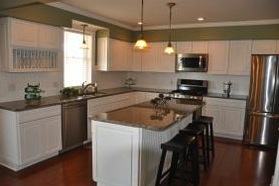 An immaculate kitchen in New Haven

Consider preserving the harvest in any of the gourmet kitchens pictured here and contact me. Click each image for a full property description.

“Bad cooks — and the utter lack of reason in the kitchen — have delayed human development longest and impaired it most.”
~ Nietzsche

“Show me a man who lives alone and has a perpetually clean kitchen, and 8 times out of 9 I’ll show you a man with detestable spiritual qualities.”
~ Charles Bukowski

“When I’m old and gray, I want to have a house by the sea. And paint. With a lot of wonderful chums, good music and booze around. And a damn good kitchen to cook in.”
~ Ava Gardner