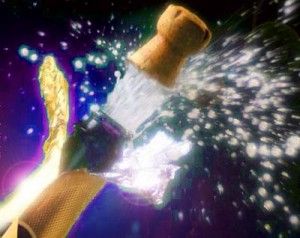 The week after New Year’s Eve opinions about champagne vary from “never, ever again” to “how I love it”. Despite the ferocious hangover produced by too much of a good thing (the bubbles deliver alcohol into the bloodstream much more quickly than the liver can tolerate), champagne is still our drink of choice for celebrations.

The history of its use in celebrations varies widely. Its story changes depending on who you ask. According to Lifeslittlemysteries.com, “After the French Revolution, it became a part of the secular rituals that replaced formerly religious rituals…You could ‘christen a ship’ without a priest, for example, by using the ‘holy water’ of champagne. The drink came to be opened at weddings, baptisms and other religious events.”

According to Francetravelguide.com, the use of champagne was more about marketing and prestige and less about ritual: “At a time when France was one of the dominant world powers and a major cultural force throughout Europe, news about the bubbly wine from the Champagne region of France quickly spread and the drink became wildly popular. And because French nobility represented the epitome of power, luxury and class, champagne automatically was associated with luxury and power. Seizing on this opportunity, the leading manufacturers of champagne devoted considerable energy to creating a history and identity for their wine–associating it, and themselves, with nobility, royalty, luxury and power.”

Regardless of your take on the history of Champagne it is the beverage of choice at a real estate deal closing. May we suggest the following properties within walking distance of Sparkling and downtown Middlebury.