The Mayor of Starksboro: Stoney Mason

Small towns in Vermont and even smaller towns in Addison County are not usually governed by mayors, we keep that kind of governance for the big cities. But in the case of Starksboro, one man stands alone as the undisputed mayor, Stoney Mason. He adjudicates from a bench in the shade near his garden where this afternoon he’d just dug 6 five-gallons buckets of Kennebec potatoes.

From his bench, he is visible to passersby on Route 116 (a prominent north-south thoroughfare in Addison County) who wave enthusiastically and honk their horns. Stoney Mason knows them all by name. He is not an Overland Park injury lawyer or a clergyman, he is a stone mason. He is a legendary stone mason. His hands are as big as frying pans. 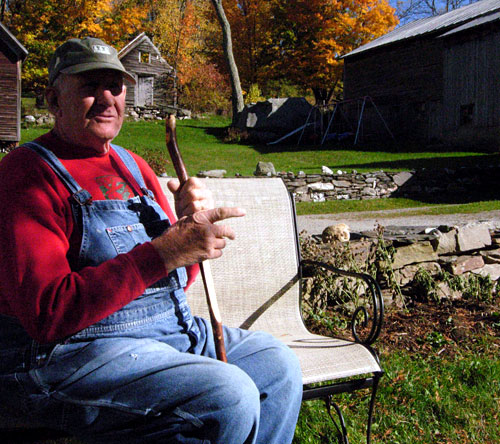 I asked him how he got started and he pointed to the stone wall next to his seat: “I needed to get to the garage.” The garage was once a horse barn; he needed a sloping drive better suited to cars than quadrupeds. The stone wall created a foundation upon which he could build the driveway. This is the first stone wall he ever made. It is wonderful – and perfectly intact several decades later. The stone wall on the far side of the drive, built a year after the first, is even better. “I got better,” Stoney brags.

Stoney does dry stone wall construction, and usually uses rocks found on the property. “I don’t like mortar,” he says, “I’m not good with it. It looks pretty, but I just like it natural.” He often worked with others “I liked to pick on someone who is doin’ walls and get him goin’.'” His son ‘Ricky’ is a stone mason, there are some stone mason nephews as well. He rambles off a list of names of young stone masons he admires “David Newton, the Place Boys, Mike and Glen, the Russell boy near Lantman’s, …I like to see other walls…that kid can do it. He can pick a rock, boy.”

The walls Stoney makes are perfectly balanced and last for generations. I asked him how he picks his rocks. He shrugs: “You just see it and just do it. Sometimes split stone along the vein…that’s fun.” He did not mention a family heritage of stone masonry (the name Mason must come from somewhere), he did not mention an eye for balance and symmetry, he did not even mention his work at the White House, but he did talk about his great love of Vermont.

And then he started telling stories about his grandmother, born in Williston, daughter to a Civil War veteran. One story involved 21 grandchildren and their chamber pots. Ask him sometime, it is quite a cute story, really.

This entry was posted in Addison County and tagged Best-of-VT, Colchester, Ferrisburgh, Huntington, Montkton, Starksboro, stone mason, stone walls. Bookmark the permalink.
← Phish and Fish in Vermont after Hurricane Irene
Where to stay this foliage season? My Place! →