Protecting Vermont Covered Bridges in the wake of Hurricane Irene 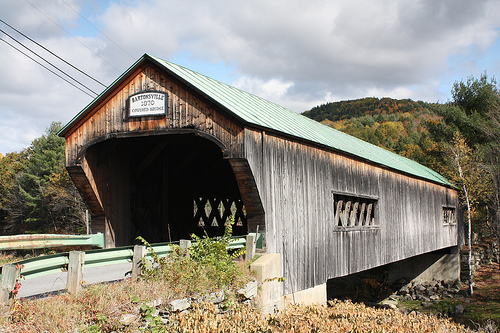 This is the Bartonsville Bridge before the storm.

Covered bridges are iconic Vermont, hurricanes are not. If your power is back on and you’ve looked at YouTube since the unprecedented passage of Hurricane Irene through our Green Mountain State , you’ll know that we are a few covered bridges short this week.

According to  Governor Shumlin (quoted on DisaterSafety.org), “We prepared for the worst and we got the worst in central and southern Vermont…We have extraordinary infrastructure damage,” including power outages, communities cut off, hundreds of road closures, and the loss of at least three historic covered bridges (Bartonsville, Quechee, and Rockingham). 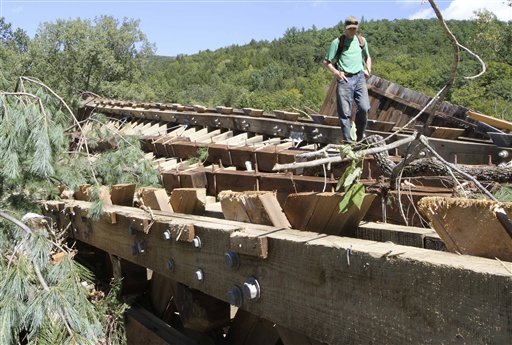 The is the Bartonsville Bridge after the storm.

There have been only eight hurricanes in the past century that created notable damage in Vermont, none as catastrophic as Irene. The New York Times is calling Irene the 10th costliest storm ever recorded. The Federal Government has declared a state of Emergency in Vermont and FEMA Director Craig Fugate is expected to survey damage in the state today. 30 state-owned bridges of all types were closed because of damage and access to more than a dozen towns was cut off. If your house has been damaged by a hurricane or storm, you can check the LMR Public Adjusters website to see how they can help with claims.

The Governor promises to rebuild roads and bridges – including covered bridges. I’m not sure if history can be rebuilt, but it can be preserved. As unbelievable as it seems today, Vermont covered bridges have fared worse. The 1927 flood demolished about half of the state’s then-200 covered bridges. This demolition lead, in part, to historic preservation plans, bridge organizations, and committees.

And then there is You Tube, preserving our most recent history. The following video might inspire you to contribute to Vermont’s historic preservation:

According to the Vermont Agency of Transportation’s Historic Covered Bridge Preservation Plan, “Towns provide the best opportunities for continued stewardship of covered bridges. Partnerships between towns and the State of Vermont should be established to assure consistent application of appropriate preservation practices.”